So the Maine Small potatoes to Big dreams program is a success. Gordon was able to get the George Jennings scores on loan from the Bangor Band, and we can begin the process to make them ready for Prime Time with the MVCB , and perhaps even perform a couple late this season. 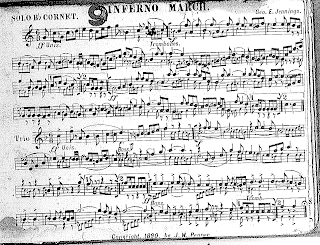 The small “perfect bound” band portfolios appear to date to pre WWII and contain ten of the Jennings marches. Most of the pieces are copyrighted around 1894. Also included are nineteen other march gems including some well known (King Cotton – JP Sousa himself!), RB Hall (The Red Men’s March w/ note “respectfully dedicated to the order of RED MEN”), a Wagner, and the CS Grafulla Washington Grays March, just in time for Spring Training.

After some copying, a bit of transcribing and transposition, flute and alto sax scoring, and even scanning and electronic archiving, the MVCB will have a new treasure trove of marches from the golden era of concert bands from the turn of the twentieth century. Thanks in advance for the work to be done (based on Gordon’s direction) from Amanda, Tom, Kelly and a few players to be named later!

And mostly, thanks to all the MVCB member’s contributions to the cause. Our $250 donation to the Bangor Band was well received and appreciated. And if the “down east” band has any parallel at all with the way things are rolling in Maine with regard to the potato business, our minor support is a nice plus. Check the chart below to see how the acres of potatoes grown in Maine are dwindling.  If it wasn’t for the American people’s insatiable appetite for french fries from fast food franchises flinging fabulously fat finger food fun at us, the Mainers would have to perfect the cultivation of dental floss on idle acreage to make ends meet. 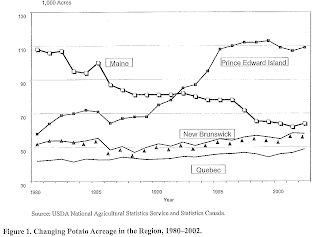 Now with regard to the cooperative starch crop that spurred the fund-raising, the potato head’s rows of taters were a disappointment to him this year. Instead of bushels of the tasty orbs, not even a hundredweight was harvested. He noted that his green thumb has turned the clay-brown color of Gaithersburg soil as the turning, planting, tilling, weeding, hilling, digging and packaging took its toll on his lily-white baby cheek skin. Blame the weather, blame global warming, blame too much time practicing his licorice stick, blame old-age, or just blame blame. Or not!  As the old professor once said, “It is in the process that we learn and gain more than in the resulting end product.”  Obviously the Prof had also faced up against discontent.

The plan was built around producing a particular variety of Maine potatoes. Kathadin potatoes can’t even be found commercially any longer in the Pine state. In discussions with the Maine Potato Board, the Maine Potato Exchange, top state farmers/producers, and Maine produce buyers, Kathadins are almost antiques! You find russets, Yukon golds, and a few varieties suited for processing (Lay’s and McCann’s are big buyers/processors up north) but no Kathadins. So that leaves Kennebecs among the planters choices and it is one of the local white potato choices around these-here Southern states, particularly with those gardeners with Scottish or English blood that won’t have an Irish cobbler potato within 100 yards of their dinner plate.  And kennebecs start from proven seed potatoes that generally produce a nice yield. As notated in a Maine potato promotional web site:

These potatoes 'hold together' well when cooked. Some potatoes seem to keep too much firmness after cooking, some potatoes get all mushy right away, but the Kennebec maintains a stable integrity... you pick up those fries and they like to hold together, you bake the potato and it's a nice consistency. Mashed, scalloped, potato strings, potato salad, roasted, baked, hashbrowns and french fries, you have only to search for 'kennebec potato' and you'll see what restaurants, fish and chip cafes, and chefs are saying about the Kennebec.

This past dismal season, the potato head had better luck with his Red Pontiacs and his small personal planting of kennebecs that were tucked in on St. Paddy’s day than the katahdins.

One potato, two potato, three potato, four…………….small potato, rotten potato, throw taters out the door!  BUT…… every supporter/subscriber received a pound or more of produce for the George Jennings of Maine Small potato to Big dream project so ALL was not lost. Thanks for your support!

So the Small Potatoes to Big Dream Projects is entering its production to performance phase – YAAAA- HOOOO !  But the next big idea is already germinating…… is it selling shares in an electronic porter device to help haul heavy horns heaving horrifically or performing  with kazoos, metronomes and ocarinas (also known as Potato Whistles) at the Montgomery Village Inauguration for Commissioners, or the development of a new system to harness the copious amount of  hot air that emanates from the Stedwick Center on most Wednesday nights to provide infinite heating in defiance of the laws of thermodynamics?  Stay tuned.