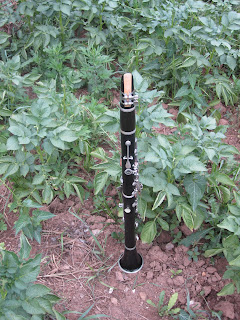 From Small Potatoes……………..
Ask somebody to respond with a single word to “the State of Maine” and half of them say Lobster. The other half, save one, respond with something related to the majesty of nature “down east’ such as pine forests, green horizons, moose, hunting and water. Did you know that the state insect was the honeybee or that the state gemstone was tourmaline? How about the Maine Bears? They are a perennial leader in NCAA Baseball. Or politicians? Edmund Muskie ran unsuccessfully for the presidential nomination in the seventies. And he wasn’t a fish (although he could be quite bland) such as a haddock or codfish, (known as scrod when they are young, and a feature of that Southern Mecca (to Mainers) Bahhhhstohhn (Boston.) And wrong again, scrod is not the past tense of that word your stand-mate uses to characterize your playing after you’ve blown a harmonic sixteenth run-up into the trio!

A few people may recall that the crown jewel of the Pine State contains Bahhhhhhhhh Hahhhhbahhhhh (Bar Harbor) and that Acadia National Park was a large part of the inspiration for a composition by Norm Berk of our Cornet section that we premiered a coon’s age ago (no, not the State’s cat, the Maine Coon cat.) And really, be honest now, did you really know about or even recall playing R.B. Hall and his awesome body of marches before you encountered our own dear Director Gaaaahdan Bahhweee (Gordon Baby,,,,,,,!..... I mean Bowie!).

Now recall that one person associated something else when asked what they think of when I stated “Maine” and it was Bangor. And further recall from the dark deep recesses of your mind (unless you have lost it from metronomic repetitious rehearsing of Kalinnikov’s symphony) that our illustrious leader led the Bangor Band forever and a day and it was wicked good and had a repertoire to “beat the band”……………or maybe just a library that was devoid of flute parts, but that’s another story.
There was a guy, a helluva composer, full of the March fever that swept the world at the turn of the twentieth century that has been compared to the incomparable RB Hall and John Philip Sousa himself! (What would a band newsletter be without reference to the Zeusish Sousa?) His name was George E. Jennings and quoting from one of Gordon’s publications “is a march writer whose life story is so obscure that even his dates are not known. He had an output of ten marches, all published by J. W. Pepper of Philadelphia between 1891 and 1898. Fortuitously, all ten of them were available to me, courtesy of the Bangor Band's library. Because the list is short, I will list them here. “ 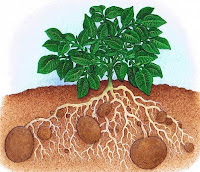 If you are like me and have been drinking the march Kool-Aid at MVCB, Maine flavored and very pure, you probably want to play these. 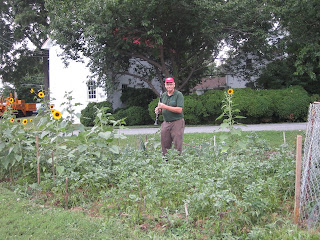 Not only do I play the oversized licorice stick, I garden, and I come from a line of farmers, USDA employees, siblings that are Master Gardeners, and a Mother whose thumb was so green that we used to celebrate Saint Ruth’s Day! This year I decided that it was time to grow the greatest potato that I have ever eaten, the Katahdin Potato, yes of MAINE – way up north (not down east) in Aroostook County.

“Aroostook, named from a Native American word meaning “Beautiful River” is aptly nicknamed the “The Crown of Maine” partly because of its geographic location but more because of the breathtaking experiences that await you. Known by several different names, including, “The Last Frontier of the East” or by many Mainers as just “The County,” Northern Maine instills memories that not even time can fade.”

And my first spouse (that’s also another story) had deep roots in the Maine Potato industry and her grandparents introduced me to “potatoes at every meal,” (Unfortunately they were not facile with potato guns………you trombone players will have to illuminate that opportunity for us.) So I bought seed potatoes from the Maine Potato Lady and have planted them in my good-sized garden in Gaithersburg, and am gonna sell shares in the harvest in order to get copies of those Jennings scores for MVCB. So to make my dream come true (yes - it is highly dangerous for you to be in my dreams and vice versa) be prepared to buy-in next autumn, but reserve your share today. I estimate three pounds each @ about $10. And if you want to really jump-in with two feet, I believe that our flight of composers/arrangers in residence (MVCB banders) might need to be pressed into service in order to construct a few parts to take those ancient Jennings scores and flesh them out to concert band orchestration.

Finally, those Bangorites think differently. Here are a few headlines from the Bangor Daily News (“It's what you need. To know”) that the Katahdins came wrapped up in (3.18.11)
More details later on your shares in the Katahdin potato crop, and the progress made on gaining copies of the Jennings charts. Meanwhile, I’ve set aside a couple of recipes for the shareholders from the All Maine Seafood cookbook that are heavy on potatoes; Erdine’s Fish Pie and Tuna Fish Delight and am looking for some potato bug pickers (do not return to the D.C!) and weeders (no not a Vandoren #3 reed or a band looking at some new charts.)

How can you resist……………… french fries, mashed potatoes and gravy, home fries, baked with sour cream and chives, even homemade chips with sea salt! (or……………ammunition!!!!)