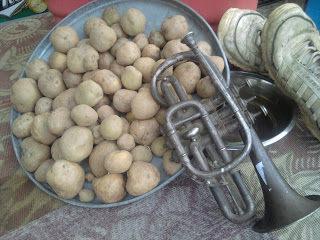 Potato Man went off to the wood,
to cut, chop and saw like he should.
To heat his rude home,
in those mountains alone,
And put up Oak cords if he could.

Throughout the long day he did sweat;
even his earlobe was wet.
He strained and he strove,
the wood he did hove,
and the logs were right sized and all set.

The ‘tater Man stopped now to rest,
And sought the sweet reed to attest.
On a licorice stick,
that B Goodman did lick,
he woke it from out of its chest.

Before the worn bard went to play,
he turned on the sink to defray
the crumbs from his plate,
from his cup, knife and grate,
to rinse off the peels of the day.

And off to the woods he fast flew,
the notes soaring out pretty and true.
He played up to the task,
but his technique was a mask,
to the water o’er running its pool.

The kitchen soon looked like a lake.
The sink had more than it could take.
And the tater head fool,
knew not of the pool,
and the spilling would crown his mistake.

Slow strolling he came back to his pad.
The clarinet now at rest, now at last.
And there did he see,
“Oh My God! Was it Me?”
The floor, walls and room were quite sad.

Potato Head quick grabbed a mop.
And the water-full kitchen did sop.
While his horn, it was tossed.
By some deep, gray, green moss,
as he swept, sucked and sopped like a fop.

Then what to his eyes did appear,
but a mouse-hole in corner, so near.
And the water did rush,
Almost as if flushed,
Through the kitchen down through the small weir.

So the lesson from that my bandmate,
Is when playing, be not sedate.
Keep your head in the game,
Concentrate and then claim,
That no flood, mouse or fool be your fate.